Blockchain questions are asked in interviews conducted by top companies and prepared by Blockchain specialists. We, at Multisoft systems will help you to crack your next Blockchain job interview by providing the essential Blockchain interview questions and answers for both fresher and experienced. Let’s have a look

Blockchain is a cardinal ledger of financial transactions that is programmed to record transactions but and virtually everything of value. The Blockchain technology was discovered along with the innovation of Bitcoins. As because everything is safe and secure in Bitcoin, it will simply run for a long time

The basic principle of Blockchain technology is that it permits the information to be dispersed in the users while not being monitored.

Types of Blockchain are:

The two types of records are:

Blocks are used to store the list of records that is Blockchain and are successively associated with all other blocks, thus represents a series known as Blockchain.

During the online ledger, each block mainly consists a hash pointer that act as a joint between the blocks.

No it is not possible to switch data once it is code in the block. In any case if any change is required, the company just has to remove the information from all the blocks as well. As a result of no different reason than this, information must be given the acute care of while maltreatment this approach

Every block in a Blockchain is secured by a strong cryptographic hash algorithm. Each block consist a unique hash pointer. Any change in the block element will take to the change in the hash identifier of the block. Thus, it provides an optimum level of security. Hence once should not get worry of this protection because this security is a gift in an exceeding block. 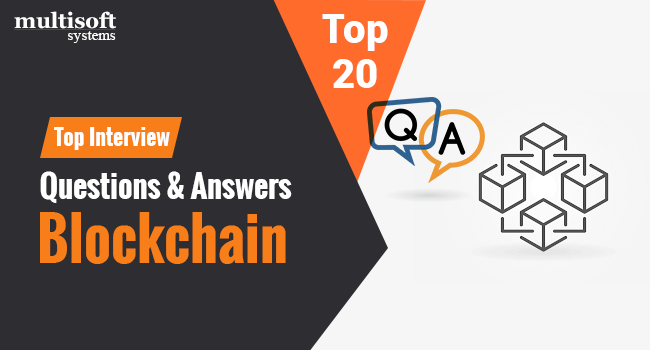 The first and of course the prime distinction is Blockchain is a digital ledger which will be decentralized terribly simply. The chances of error during this method are way under that in a standard ledger. A normal ledger is that which is ready by hands whereas the Blockchain performs all its tasks mechanically. You simply have to be compelled to assemble it in an exceedingly correct manner and by following all the rules.

The types of records that are kept in Blockchain are:

No, there is no such restriction on keeping records in the Block chain. Organizations are widely using Blockchain for securing all kinds of records.

Insight of the benefits of Blockchain:

Yes it is right that Blockchain can never have a parent Block. Each and every block is independent in Blockchain

Most widely used algorithms are:

The methods that are used in assaultive the RSA algorithms are:

Secret Sharing is an indisputable fact that matters in digital transactions. It is an associate approach that splits secret or personal data into different small units and directed them towards the users on the network.

The genuine data will merely be assimilated once a candidate conforms to combine them at the side of others. Their square measure many security-related advantages it offers in Blockchain technology.