Artificial Intelligence is the field of computer science that highlights the construction of intelligent machine that performs and reacts like individuals.

Artificial intelligence Neural Networks are composed of multiple nodes, which imitate biological neurons of human brain, empowering the machine to think and learn the same way the human’s do- making them fit for seeing things like speech, objects and animals like we do.

Prolog in AI is a programming language based on logic.

Strong AI: It makes solid claims that computers can be made to think on a level equivalent to humans

Weak AI: It predicts that some features that resemble to human intelligence can be united to computer to make it more useful tools. 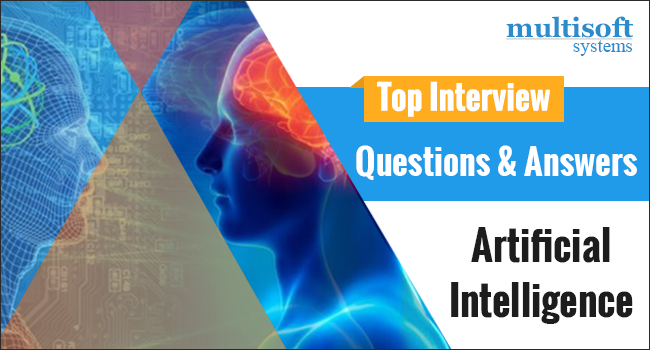 Statistical AI: It is concerned with “inductive” thought like given a set of pattern, induce the trend etc.

Classical AI: It is more concerned with “deductive” thought given as a set of constraints, deduce a conclusion etc.

Artificial Key: If no key either stands alone, then the last resort is to, simply create a key, by assigning a number to each record. This is known as artificial key.

Compound Key:  When there is no single data element that exclusively defines the existence within a construct, then integrating various elements to create a unique identifier for the construct is known as Compound Key.

Natural Key:  Natural key is one of the data elements that is stored within a construct and is used as the primary key.

Heuristic approach is the best way to go for game playing issue, as it will use the method based on intelligent guesswork. For e.g. Chess between humans and computers as it will use brute force computation, looking at hundreds of thousands of positions.

Anything identifies its environment with the use of sensors and acts upon an environment by effectors are known as Agent. Agent includes Programs, Robots and Humans etc.

In artificial intelligence, neural network is an emulation of a biological neural system, which receives the data, processes the data and gives the output based on the algorithm and empirical data.

An algorithm is completed when it dismisses with a solution when one exists.

A heuristic function ranks alternatives, in search algorithms, at each branching step based on the available information to decide which branch to follow.

Generality is the amount of ease with which the method can be modified to various domains of application.

A top-down parser begins by guessing a sentence and logically predicting lower level constituents until individual pre-terminal symbols are made.

These are the two strategies which are quite similar.

Best first search: In this we expand the nodes in accordance with the evaluation function.

Breadth first search: In this a node is expanded in accordance to the cost function of the parent node.

Frames are a modified of semantic networks which is one of the popular ways of presenting non-procedural knowledge in an expert system. These are used to share knowledge into substructure by representing “stereotyped situations’.

Scripts are similar to frames, except the values that fill the slots must be ordered.  These are used in natural language understanding systems to establish a knowledge base in terms of the situation that the system should understand.

In Artificial Intelligence, Bayes rule can be used to answer the queries conditioned on one piece of evidence.

If a Bayesian Network is a representative of the joint distribution, then by summing all the relevant joint entries, it can solve any query.

The motto of an Inductive Logic Programming is to come up with the bunch of sentences for the hypothesis such that the entailment constraint is satisfied.