COBIT stands for Control objectives for Information Technology are uniquely created by ISACA to govern and manage the IT services.

COBIT is widely used by the professionals who have some responsibilities about the processes of the work flow in the business and its technology. The information should be relevant, reliable and have quality and control over the information and as well as of technology.

COBIT 5 was developed for various reasons, some of them are:

The components included in COBIT are:

Framework: In this component, the basic thing is to plan the best approaches and governance of information technology by its processes and domain and also link them to the need of the business.

Process descriptions & Control objectives: In this component, there is list of requirement which are measured by the management effective control of several processes of IT 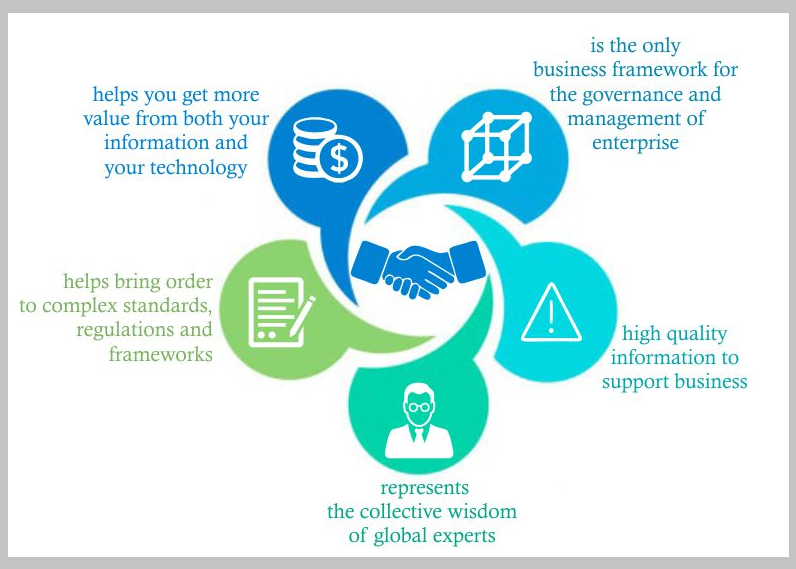 The different versions of COBIT are:

It enables us to differentiate between the roles of the management and the board and to direct and track the objectives decisions and priorities relevant to IT.

There is publication which is developed to provide guidance regarding of what is required to be done to make the transition effective and smoother.

Governance:  It takes care about the laws and perspectives which are needed in the organization.

Compliance:  It is the consideration taken up by the organization to follow to governance in several manners.

In most of the It companies, anyone who possess a little knowledge can access the data and information to the confidential property. Organization fails to recognize the data and there is not someone who monitor about what is downloading by whom.  So sorting of data would be preferred first that would be vital to address any loss in the data and its protection.

COBIT 5 is associated with most frameworks, standards and controls which incorporates ISO27001, ITIL, Prince 2, SOX, TOGAF and various others. It takes care of all the internal and external IT relevant services. In addition to this, it provides a systematic view of the management and governance of the IT organization which is based on enablers and their aggregate numbers.

COBIT 5 is aimed to classify that security of the information is a prevalent enabler which disturbs the whole organization and not just one service.

COBIT 5 differentiates among management and governance. It also calls for several dimensions and inputs to the system of the governance. COBIT 5 also includes various frameworks that were developed by ISACA.

The framework offered by COBIT provides extreme benefits and scope unlike any other framework. It helps in keeping high level of information to provide the required support for any decisions with respect to business and it also helps in accomplishing the strategic set goals through innovative and effective usage of the IT. It also helps in achieving optimal cost of the technology and services provided by the IT.