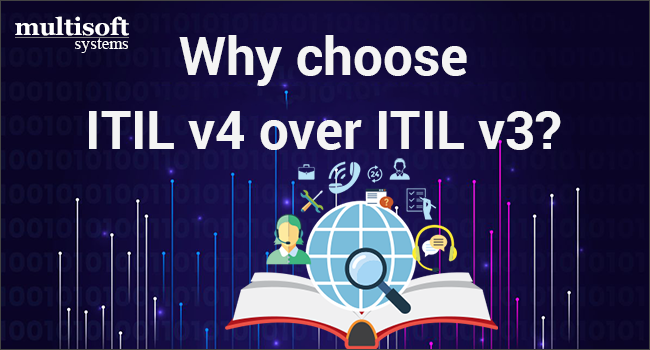 ITIL V3 was released in 2008 and gets updated in 2011, whereas ITIL 4 was released in April 2019 and introduced with some significant changes. ITIL v3 is more service-oriented; it focuses on the full lifecycle services in the IT companies and defines roles, responsibilities. But the ITIL v4 is designed to provide the enterprises with all-inclusive guidance for Information Technology Management in the modern service economy. It provides an end-to-end IT/Digital Operating Model, covers the full delivery of tech-enabled products and services, and guides how IT interfaces with trendy business strategies. The new version deals with the best practices to manage the overall service management of an organization. The whole concept of ITIL v4 Foundation is actually a shift of ITIL 3. So, the IT professionals with ITIL 3 knowledge get an extra edge in pursuing the ITIL 4 training. Now we will go through some of the modifications done in the newly introduced version.

Which are the key modifications done in ITIL v4?

The ITIL v4 practice describes techniques for analyzing processes, systems, and architectures. Some of the methods, including service requirements, are defined during the service design stage, represented by the fourth version are applied in the third version. ITIL 4 practice of portfolio management refers to various types of portfolios, such as project, service, and customer portfolios. It was not available in ITIL v3 Foundation. ITIL v4 is featured with some additional guidance to manage releases in Agile/DevOps environments, but the order version, ITIL v3 Foundation wasn’t. ITIL v4 deployment management practice explains numerous approaches of hardware and software deployment along with some additional advises, whereas the ITIL v3 process of release and deployment management explained a limited number only.

The new version of ITIL has introduced a value-based system which is a journey weaving through. It has replaced the lifecycle-based old system. The service cycle, which was based on service design, service strategy, service transition, and service operation with continual service improvement (CSI), can be represented as a value stream now. It can be presented in seven steps, and the steps have been mentioned below.

The nine guiding principles of ITIL Practitioner are seven now